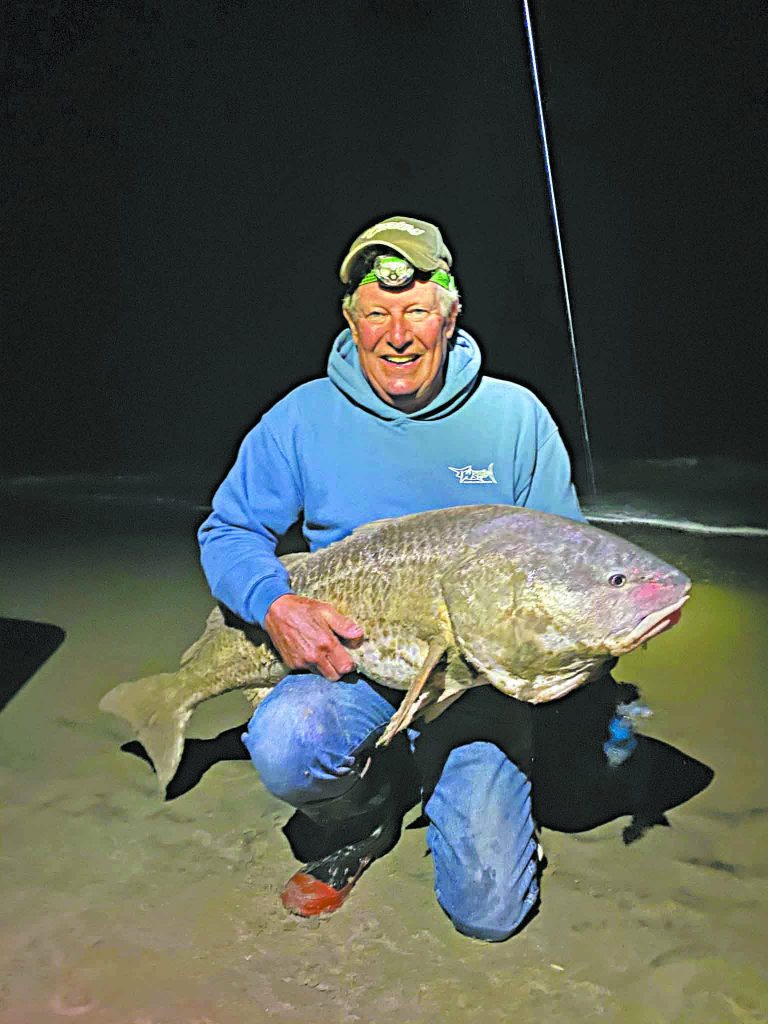 There were many ways to win this year, with sixteen different categories. One fish could win only one prize (with the exception of the Most Caught category), but a single angler could win multiple categories if he/she had multiple fish registered.

A first and second place for Longest Red Drum were honored, with Moe Barsalou taking home the $2,000 first place pot. His winning catch found his hook around 2:00 am, just when the mosquitos seemed to be winning their war against Barsalou. Even though he had lost a couple of bites earlier in the day, he kept his hopes high during the 15 minute fight. “I’m always anticipating the big one,” remarked Barsalou. The third time really was the charm, as he reeled in his monster redfish, coming in at 49.25” and winning the first place title.

Falling into second place for the Longest Red Drum was Dan Supplee and his 49.0” red drum, measuring just a quarter of an inch shy of the champion. Residing in Pennsylvania but visiting his home in Salvo, Supplee has competed in this tournament four times before and is familiar with the area’s waters.

At the end of the day on Saturday, while Supplee was settling in for the night on the beach with lines in the water, his bait was taken by his big fish. As other anglers slept, he reeled in his $1,000 catch. Supplee says it took the moving of his headlight up and down with his heaving of the rod to get the attention of any other anglers, but eventually someone awoke to help him haul in his fish.

Robert Wells, from Wilson, NC, was the third place champ with his drum measuring 48.5”, again just a hair shorter than the preceding placeholder. Wells had experienced a good bite throughout the tournament, but he hadn’t caught anything big. Finally, fishing close to the northern fishing boundary in wind and rough seas (“good drum weather,” as Wells calls it), he got a solid bite.

“My rod hollered,” Wells described, as his pole dipped hard and the clicker started to sing. “I had a feeling it was a winner.”

Several charities benefited from this year’s tournament, including first and foremost the NCBBA, who will use the money raised to ensure the preservation of and vehicular access to the natural beach resources of the Outer Banks. Other charities donated to included Shop with a Cop, Hatteras Island Meals, Hurricane Dorian Relief, and the Outer Banks Community Foundation.

Plans for the 12th annual NCBBA Red Drum Tournament are already in the works, and details will be published as they become available. With a goal of 400 anglers in 2020, the organization hopes to top this year for the record amount of participants.

For more information on this tournament or to view a more complete leaderboard, visit the North Carolina Beach Buggy Association’s website at www.ncbba.org.