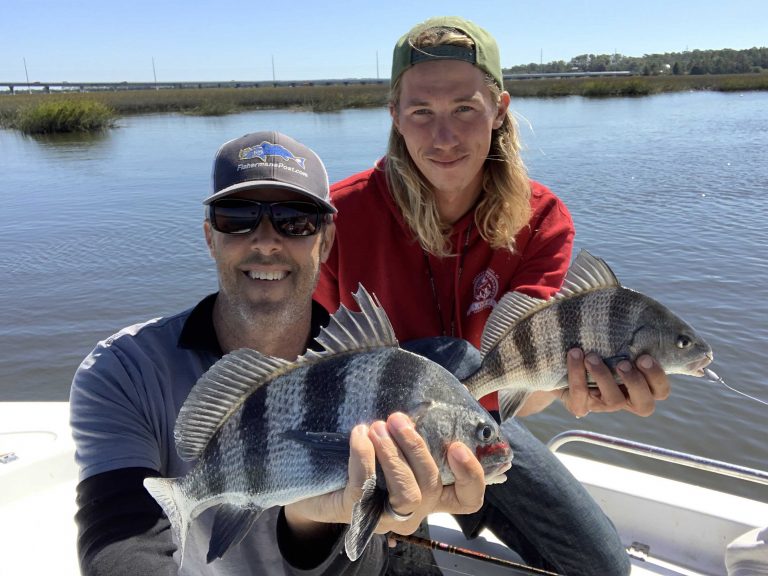 If Plan A doesn’t work out, you want a captain that has a Plan B. Then if Plan B doesn’t work out, you really want a captain with a Plan C, and a successful Plan C is what Capt. Kaleb Frink, of Angry Pelican Charters out of Southport, thankfully delivered when this year’s finicky citation red drum didn’t show up nearly as consistently as we had hoped off the Oak Island beachfront.

The conditions on our mid-October day, though, were good for black drum, as the weather was cooling and so were the water temperatures. Kaleb much prefers the cooler water, for that’s when black drum feed the best. Once the weather and water are hot, they tend to push out into much deeper water.

The terrain Kaleb pulled us up to on trolling motor perfectly matched the criteria he looks for when targeting black drum—oyster rocks with an extreme drop-off nearby, and ideally that drop-off is a really deep hole in a fairly shallow creek.

“The deepest hole in a creek,” he explained, “is most always going to be your best potential for black drum.”

Our Oak Island creek varied from 6-12’ deep, but the hole we were getting ready to throw into sat in about 17’ of water. He used the anchor feature on his trolling motor to keep us off of the hole, and the visible grass of the oyster rock showed on the far side.

“The black drum are hanging out on the oyster rocks eating crabs, eating barnacles, eating oysters. They’re shellfish eaters. They love crustaceans,” he continued, grabbing a rod and taking the lid off a small bucket of live fiddler crabs.

The rod he handed me had a bottom sweeper jig tied onto the leader, and when I asked why a bottom sweeper jig, Kaleb answered, “The way it holds the bait, the way that crab sits on the jig, it’s the full presentation. You don’t have to worry about a Carolina rig fouling up because when that fish bites the bottom sweeper, he’s got the hook in its mouth.”

Kaleb grabbed one of the fiddlers and quickly but deliberately wound the crab onto the hook. Again I asked about the why, and Kaleb freely shared, “You want to come in from the bottom side up, and then angle the hook so that when it comes out it’s in the legs and looks like it is mimicking one of those legs.”

He continued, “You want the hook to come up through the center of the mass of the crab, a good, solid hook set. Don’t worry about killing the crab. Be sure to get a bunch of hook in that crab.”

“You want a slight roll,” Kaleb explained. “You don’t want a cannonball landing in there. You want it to move a little bit, but you don’t want a fast sweep. You want the jig and bait ticking across the bottom.”

The tide was falling, but we were a little early for the ideal time to target this oyster rock and deep hole. For black drum, Kaleb shared, you want the bottom part of the falling tide. That’s the best time because it’s going to put most of your bait in the hole, and that’s usually going to trigger those fish into feeding. They’re sitting in those holes waiting for everything else to get flushed out of the shallow marsh flats.

My hook landed, as Kaleb had instructed, about 5-6’ off the visible grass, and being optimistic, I asked Kaleb what type of bite to expect. I wanted to know how he instructed clients, some of them who have never saltwater fished before, on how to set the hook.

“He’ll tap it once or twice. The first tap is usually him getting the bait in his mouth, and the second tap is, more times than not, that bait getting crushed. After the second tap, he usually turns and swims off with it, so it will be tap, tap, and then that rod tip will slowly load up.”

“That’s where you set the hook,” he finished. “Don’t set the hook on the tap, tap. Wait for him to turn and swim.”

Kaleb’s explanation was great, but still my first few casts came back with an empty hook. The blacks were there, but they were winning—successfully stealing my fiddlers.

Sometimes the empty hook has to do with slack in the line and not feeling the bite, but I felt good about there being little to no slack. The other explanation, Kaleb offered, was simply that black drum are similar to sheepshead. They’re masterminds at picking the crab off the hook.

Kaleb now had his own fiddler crab on the bottom in the same zone, and he set the hook on our first black drum of the day. He brought in another fish or two, and then finally I felt the pull and quick tugs of a black drum strongly resisting being brought in.

The sizes of our black drum ranged from just under to just over the keeper mark. The action was steady, though, and as we headed back to the Wildlife ramp for Kaleb to meet his afternoon clients, we were both relieved that Plan C worked and the fish had been there on the small window of opportunity we had.

Capt. Kaleb Frink has been working with Angry Pelican Charters and owner/operator Capt. Mark Greene for two years now. Last year Kaleb mated on the offshore boat, and this year he is running the inshore operations. You can find out more about Angry Pelican Charters by visiting www.angrypelicancharters.com, or by calling (910) 742-0296.

If you’re looking for a great-tasting, hard-fighting fish, then black drum may be your answer, and if you’re wanting a quick lesson in black drum, complete with instructions, suggestions, and insights, then Kaleb and Angry Pelican would be a good Plan A.