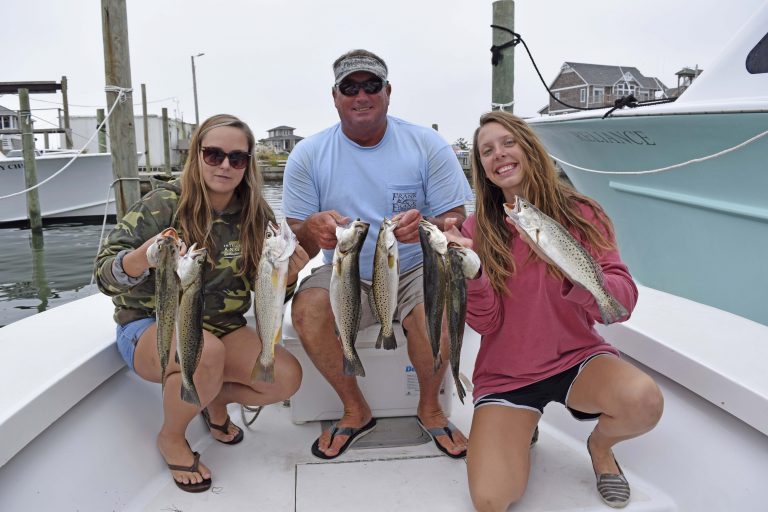 The inshore guides on Hatteras Island didn’t need a flounder closure to push them into chasing speckled trout, as the slow red drum bite all season already had them targeting trout on most days. And speckled trout was the target species for Katelyn, Rosa, and me on our free Friday morning before heading to Camp Hatteras shortly after noon to setup for registration for the Hatteras Island Surf Fishing Challenge.

Capt. Joey VanDyke, of Fingeance Sportfishing, was ready for us at Hatteras Harbor Marina, so we climbed onboard, careful not to spill any of our Dancing Turtle coffee, and made the short run out behind Hatteras into the Pamlico Sound to target an area of broken grass sitting in 4-5’ of water.

“The red drum haven’t been good all summer,” Joey explained as he started handing out rods tied up with soft plastics. “We’ve only been seeing a 12 to 15-inch class of drum, so most of our focus has been on trout.”

Joey liked our first stop, as it had been producing well in the days leading up to our trip. Katelyn and Rosa stayed up towards the front of the boat, and I took one of the back corners.

“We’re throwing artificials for a couple of reasons,” he continued. “For one, we haven’t really been bait fishing since the hurricane. I pulled my hogfish traps prior to Hurricane Dorian, and the bait’s been unpredictable since so I haven’t put my traps back out. The other reason is that artificials have been working just fine.”

The trout in late September were feeding on hogfish and glass minnows, so the soft plastics he had picked out for us were glass minnow-imitations.

Joey’s boat was like most of the other inshore guides in the area—no trolling motor and no Power-Pole. He targets the scattered grass beds by getting the boat in position for big wind drifts. If he happens to drift through a “hot” trout bite, then Joey will quickly drop an anchor to better target the area, but for the most the part the game is drifting and covering ground.

The bite, as Joey predicted back at the dock before pulling away, was steady but scattered. We regularly hooked a fish here and a fish there, but we never found a zone that produced multiple bites. Katelyn, Rosa, and I were close to putting our limit of specks in the box, a nice stringer of 1-2+ lb. fish, but then our zone of scattered grass stopped producing.

Joey had us reel in so we could try another area that he also liked to target this time of year, and soon we were in a slightly different habitat. This area featured uninterrupted grass, as opposed to broken grass, and though we were once again in 4-5’ of water, this time we were drifting a ledge close to a shoal of only 6-12” of water.

Our new location was a little calmer and our drift a little slower, so Joey set up Katelyn and Rosa with popping corks. He especially likes popping corks under these conditions because it’s easy for the fish to hear the pop (and popping corks can sometimes be clumsy for people to cast, so friendlier conditions make it easier for clients to cast with success).

“Cast out, let it sit a couple of seconds, keep the line tight, give it a good chug, let it sit there a couple more seconds, then chug it again, and keep repeating the process,” Joey instructed, almost mirroring the instructions he gave earlier for the soft plastics, as he handed Katelyn and Rosa each a popping cork rig.

As soon as Joey made the change to popping corks, the bites came quickly.

One quick trout by Rosa was followed by another. Then Katelyn added a couple more fish. So we had our limit, and all three of us checked our Fish Post phones for tournament calls and messages as Joey headed the boat back to the docks.

Capt. Joey VanDyke, of Fingeance Sportfishing, has the familiarity with Hatteras waters that you want from an inshore guide when out on the Outer Banks. He spent his childhood fishing docks and creeks. From age 12-13 he went to work cleaning fish for Risky Business, and then made the natural progression to mating on bottom fishing and charter boats, as well as helping out on numerous commercial fishing trips.

Joey started guiding on his own in 2002, and he’s been full time ever since.

Joey will be targeting trout on grass beds and anywhere else they may try to hide behind Hatteras Island up until Thanksgiving. He then spends some time guiding bear and duck hunts, but by February he’s back to fishing, booking shad trips on the Neuse River.

When March comes, he moves over to the Roanoke River for the well-known striper bite, and he keeps busy with stripers until the middle of May when he gets back on Hatteras Island for another season of targeting red drum, trout, spanish, and blues. He especially loves when the cobia move in so that he can use his 27’ custom tower boat to successfully sight fish for these great-tasting brutes (and some citation red drum) just off the beach.

For more information on the vast array of possibilities that Joey can offer, you can visit him online at www.outerbanksfishing.org, on Facebook by looking up Fingeance Sportfishing, or call him at (252) 475-0402.

Joey’s motivated to put his clients on the most fish possible on every trip, and I’m going to believe that if I wasn’t with my two young-20’s female employees, then he might have put a popping cork setup in my hands, too.